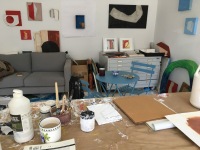 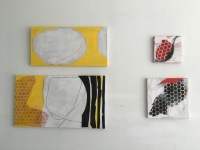 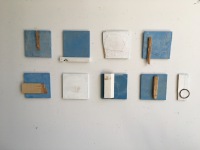 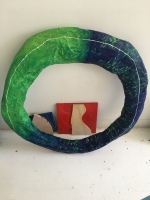 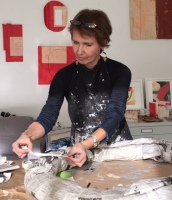 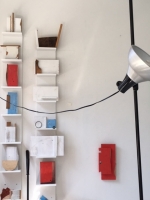 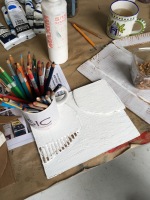 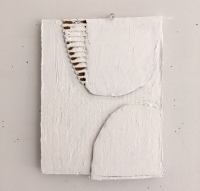 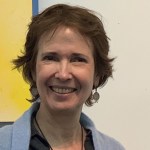 “In all my work, I am looking for the same place: the spot between harmony and discord that gives energy as it also provides refuge. I get a lot of my energy from materials, which can entice me out of nowhere into new lines of work, such as the sculpture made of scrap wood that I began in 2013 and then returned to in 2018. At any given moment, I am using papier maché in one place, putting gesso over an old canvas nearby, and clamping bits of wood together wherever I can find room.”

A native New Yorker who works in NYC and in Southampton, NY, Diane had an earlier career including 17 years as a consultant to local non-profits; work in NYC government; and several years as a lawyer at a NYC firm.

In late 2006 Diane began making collages that started her on her current path; in late 2007 she left her consulting to focus on her art full-time, and to study with Bruce Dorfman at the Art Students League in NYC. She has had solo exhibits including at the University of Connecticut, U. Mass. Amherst, and the Living Room Gallery at Saint Peter’s Church in Manhattan, as well as pieces in group shows in NYC, elsewhere in the US, and in Italy. In 2019, she was part of the exhibit Found Object at ODETTA in Bushwick, and Among Friends in NY, NY, She has attended the Vermont Studio Center with an artist’s grant, and has won the Allied Artists of America award at the Butler Institute of American Art.