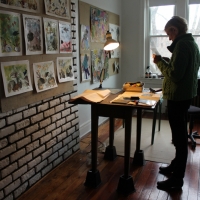 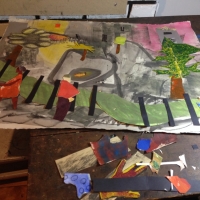 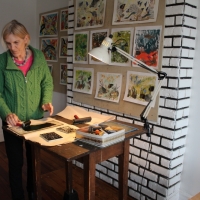 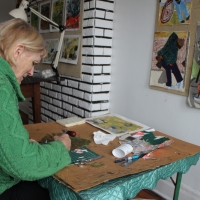 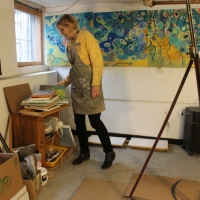 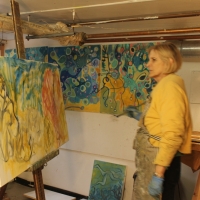 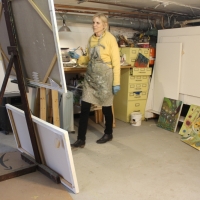 Lucille Nurkse was first captivated by fine art while taking a history of art survey course at Wellesley Collage in 1967. In the summer of 1968, she studied Chinese calligraphy with Wang Chi Yuan in New York City while she worked at the reception desk of the Metropolitan Museum of Art.  She was fortunate to take a design course where she first encountered Color Aid paper at Harvard during the summer of 1969.  While still living in Boston, she continued to study with Wang Chi Yuan and eventually moved to New York City in 1973 to continue her studies with him.  When he died unexpectedly in 1976, Lucille Nurkse embraced western influences and began painting from her experiences.  Nurkse’s work continues to embrace these influences today, whether in oil painting, watercolor landscape, or paper collage.  In 2006 he received the Myra Biggerstaff Memorial Award by the National Association of Women Artists..  She has been awarded residencies at the Blue Mountain Center, Byrdcliffe Art Colony and Virginia Center for the Arts. Her work has been displayed at the Zimmerlli Art Museum at Rutgers University.  She showed for many years with the Brooklyn Waterfront Artist Association. In 2009 she received the William Patterson University Purchase Award for printmaking..  In 2016 her work was selected for the Tawain Embassy through the Art in Embassies Program. In 2015, 2017,  and 2018, she was in residency in Port a Vendin, France. Her work has been written about in the New York Daily News, the Woodstock times, and other publications. Lucille Nurkse earned a Bachelors of Arts in philosophy from Wellesley College.  She received a Masters in Early Childhood Education from Brooklyn Collage.  Lucille Nurkse earned a living as a medical secretary and an early childhood teacher in the public schools in Brooklyn, NY.